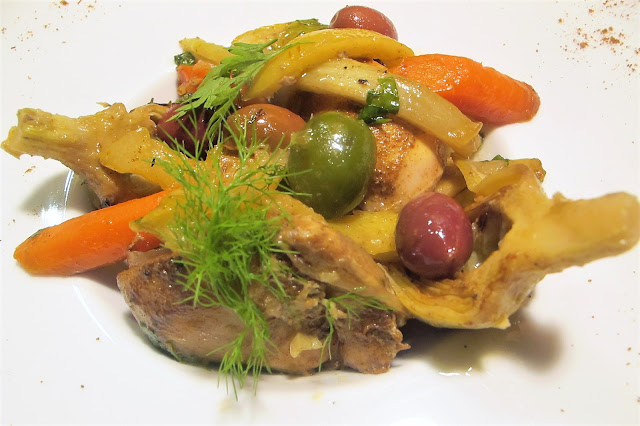 I really discovered the tagine (or tajine), or rather the tagines since there are an infinite number of them, more than 40 years ago, during the 1977 Summer. Then a student in a business school in Paris, my school sent me to Morocco for a compulsory 2-month or so internship in a Moroccan bank in Casablanca. Moroccan banks are as boring as French banks, or as anywhere in the world, I assume. Even though this was not the most exciting occupation, there were some advantages in working there. First of all, I stayed a much longer time in the country (3 months altogether) than the normal "tourist" time. Then, I got to know, and friend with, some Moroccan people whom I was working with, or whom I met through my colleagues in the bank. Thus, I was invited at a traditional Moroccan wedding in the medina (old city) of Salé, near Rabat, I discovered the traditional squab pastilla or almond paste stuffed pastries named cornes de gazelle in the best possible places of Casablanca, I spent the Ramadan with a Moroccan family in the old city of Fes, etc. As a result, although I didn't fall in love with the bank industry, I did with the country! 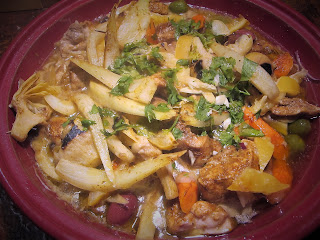 And I had my first authentic tagine. With a fellow student, we rented a Renault 4L, a cheap and very rustic car, to drive down to the South Morocco, Ouarzazate, the Draa valley and the Dades gorges... Leaving Marrakesh, we drove through the Atlas mountains and the tizi (pass) n'Tichka. As there were not that many motels on the route at this time, and/or since we didn't have that much money, we asked farmers the permission to set up our tent and to spend the night on their fields. Moroccan hospitality is not a legend. I had the opportunity to check it at multiple occasions. This is how we were invited to share a farm tagine, cooked on a wood fire. Everybody -almost everybody as, sorry ladies, women were not authorized to be with foreigners- was eating in the same dishware, the conical and iconic tagine, grabbing the food with the hand and a piece of flat bread. I don't remember exactly what was in it, some vegetables and pieces of cheap cut of lamb and/or chicken, but this has been the best tagine I have ever had. You know, cooking is much more than recipes...


Today -there are so many things to say about tagines, this will be the topic of several other blogs- I would like to feature the most famous and one of the best tagines, combining the acidity of the lemon, the astringency of the olives and the sweetness of the onion and other vegetables... Every time I prepare it, this is a hit. The chicken / preserved lemon / olive tagine of course. Or one version of this tagine that allows many variations: on top of the basic ingredients, I added artichoke hearts, fennel, and carrots. 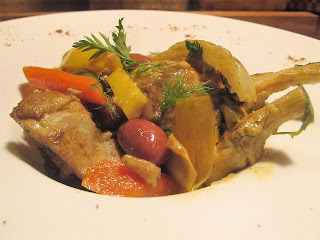 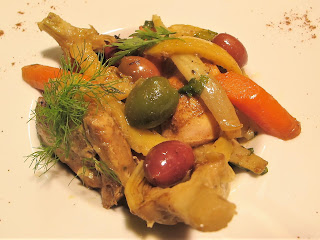 Serve classically in individual plates...
or serve in the cooking dish for everybody to grab food with the hand, like in those Atlas farms!
entree Morocco