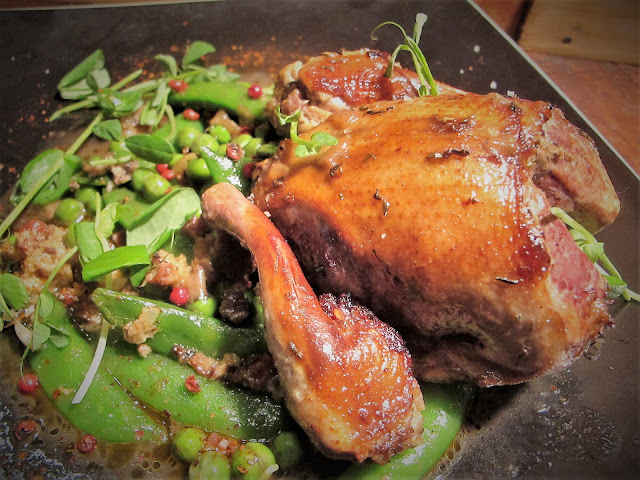 The Picasso's recipe is missing!

Le pigeon aux petits pois (the pigeon with peas) is (or was?) a 1911 cubist painting by Picasso. This pigeon became famous again a century later as it literally flew away* from the Musée des Arts modernes of Paris where it was exposed, and was supposedly destroyed by its thieves...
Well, if this was obviously a significant loss for the world of arts, the prejudice was more limited culinary-wise since, between you and me, the recipe proposed by the Master Picasso was slightly obscure, as you can figure it out by yourself...

* In French, "to steal" and "to fly" translate by the same word, voler.

All about gaminess and sweetness

But the Picasso's pigeons aux petits pois is not only a valuable painting... and alliteration, this is also a refined dish much appreciated by gourmet foodies all over the world, and of course in France, where it is proposed on the menus of multiple grand restaurants. The association and the contrast between the (not-exaggeratedly) squab's gaminess, the sweetness of the peas and the woodiness of the Cognac sauce is just sublime... 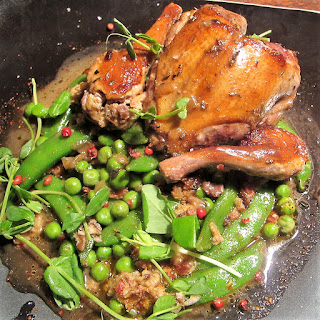 Preparation of the squab:

You get what is called in French the bateau (literally the "boat"). It is important to cook the squab (I would say the same for any small poultry) as it will avoid that the meat "shrinks" and t will keep it moist.


Keep preciously all the pieces you removed, you will use all of them (well, except the extra skin pieces)

Preparation of the sauce:

Stuffing and cooking of the legs:
The peas and snap peas: 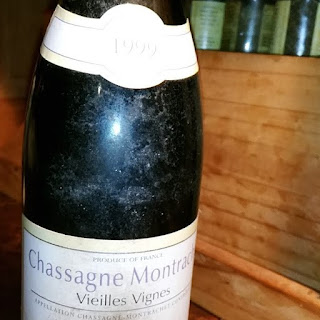 Cooking of the squab "boat":
Place the squab "boat" and the stuffed legs on a bed of peas and snow peas, pour some sauce, spread the pea shoots and some pink pepper corns.
Served with a Chassagne-Montrachet Vieilles Vignes 1999 red (pinot noir / côte de Beaune).