Porgy with a Provence potato, tomato and olive stew 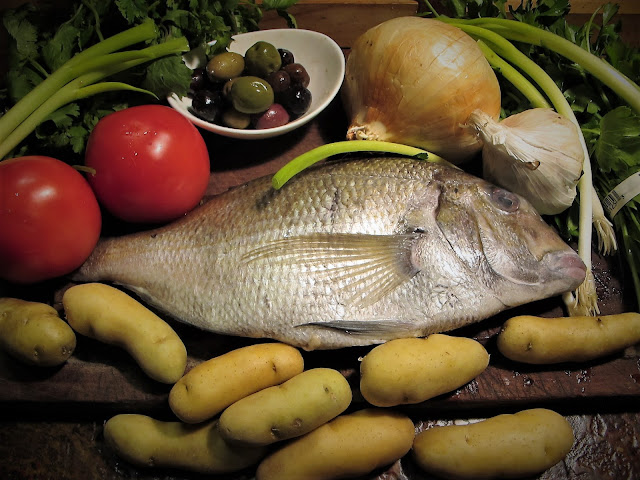 Porgy is a very common fish in Europe, also called sea bream in UK English, orata in Italy, and dorade, dorado or dorada in France, Spain, Portugal, Poland, Russia... In fact, all those latter names refer to the presence of gold (oro in Italian and Spanish) reflects on the head of one of the fish varieties, the gilt head bream. The gilt head bream is generally bigger than the other varieties of breams, the black sea bream, the most common one, or the red seabream which is... pink! It is named dorade in French, but in case you have to order or buy one in a restaurant or at a fishmonger in France, there are some subtleties, and "subtitles" to know: the black sea bream is called dorade grise, the red sea bream dorade rose, and the gilt head bream dorade royale or simply daurade (note the different spelling). Also, beware of a possibly confusing, but delicious, fish named the dorade coryphène, which is not at all a bream, but the iconic mahi mahi.

I found recently this porgy at a fish market, and honestly, this should be, as far as I remember, the first time I have seen one in the US  for more than a decade. When I first arrived in the US, I thought the snapper was a dorade. However, I realized they were not the same fish, although they have many things in common, their size, their shape (the snapper having a slightly thinner profile), the way to cook them (BBQ-grilled or oven-roasted), their taste... although as far as I am concerned, I think that porgy has a more delicate taste than snapper... And here is my point. I got this porgy for $5/lb. (whole fish) in a rather expensive grocery store, with no promotion, while the snapper should be around $12/15/lb. As a comparison and whereas fish prices are generally cheaper in France than in the US, this is the price standard dorade (farmed black sea bream) is sold in France. Porgy is clearly an underrated fish and a more than excellent deal, which wouldn't be a problem for me except that it is also a rare fish... on the fishmongers stalls, and on the stalls only as the species is very abundant and not threatened at all! Yes, those fish are jumpin'... like in this musical named... Porgy and Bess! No kiddin'! 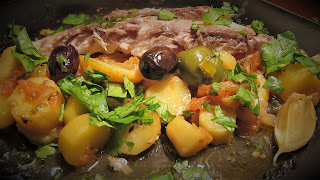 I prepare this porgy à la provençale and served it, to stay in tune, with a fricot provençal. Fricot is another word for stew in French, and the fricot provençal designates specifically a potato, tomato and olive stew flavored and cooked with herbs and olive oil.

For the  fricot:
* the recipe calls for olives vertes cassées (broken green olives). Thus, I just "broke" them, but this was just to "pretend": the term olives cassées refers in fact to a way to prepare green olives in Provence, where those are roughly crushed and macerate in water for 2 or 3 weeks, the water being renewed every day till the olives lose their astringency. Of course, alas! I didn't have broken olives... 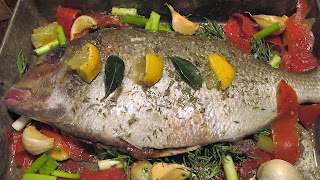 For the  fricot:
For the porgy: 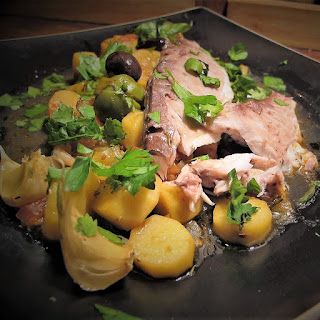