A FISH THAT I LOVED LONG BEFORE TASTING IT [2/3]

Other recipes of Mahi Mahi 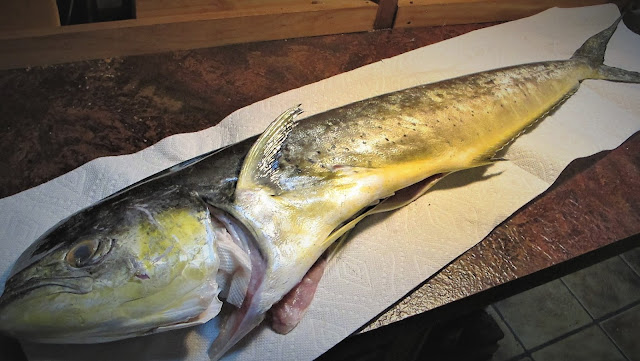 Mahi Mahi is so good as people named it twice... and I feature it twice, so far!

I already told here the story of how I fell in love for this fish before ever eating, or even seeing, one, just through the reading of the books of solo circumnavigating sailor when I was a teenager… So, a couple of months ago, when my favorite grocery store proposed this 3-foot long whole mahi mahi, I didn't hesitate one second and I bought the whole fish... So happy, almost as if I had fished it myself! This one is a female as her forehead curve is smoother than the almost square-shaped and very recognizable male forehead.
Of course, I didn’t cook it as a whole… well, no party was planned then, too bad, it would have been fun, but I made 4 or 5 meals with it, fresh then frozen.
Here is a selection of the different ways I prepared it : 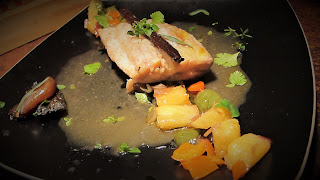 Mahi mahi fillet poached in a broth made with the head and bones of the fish, en enriched with vanilla beans, served with a “fricassee” of pineapple and bell pepper dices (those two are a great match together). 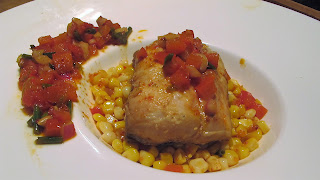 Dorade coryphène (Mahi Mahi in French) boucanée, i.e. smoked on the BBQ. I put corn husks on my charcoal, to generate smoke, in the same way as people put sugar cane leaves in the French Caribbeans. It was served with corn and a sauce chien: lime juice, hot chili peppers, ginger, scallions, shallots, spices, coriander, 4-spices… used as a marinade, then as a sauce. 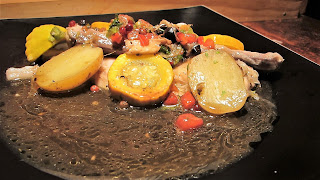