When the sky is grey, you have to put some colors in your plate 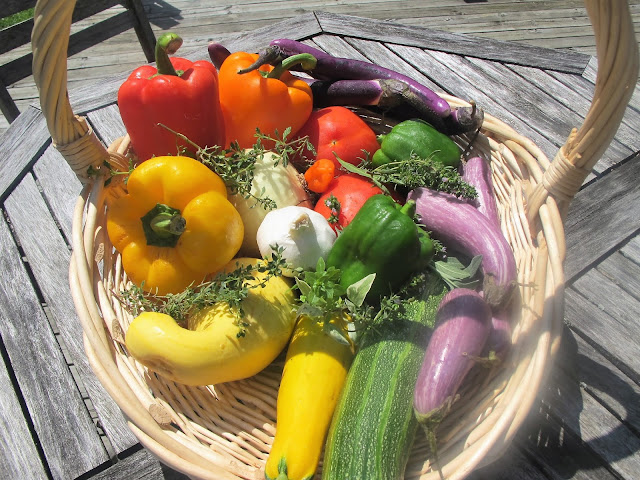 Ah, la ratatouille!!! Just saying those three syllables is a poem by itself and brings up memories of Jean Giono or Marcel Pagnol’s novels… much more, as far as I am concerned, than a cartoon by the Disney studios. Sorry little rat! Ratatouille… I feel the sun caressing my skin, I hear the cicada singing, I smell all the perfumes and aromas from Provence, and I crave the chilled rosé wine shimmering in my glass…

Sunny ratatouille
I am not from Provence, and nobody in my family was, although some uncle and cousin of mine eventually emigrated to Marseille or Aix-en-Provence. I had neither ratatouille nor pastis (well, who knows?), in my baby bottle, but as long as I can remember, I have always loved those two, yes, two, the ratatouille and the pastis. Some day, I might tell a story about my ‘addiction’ to pastis when I was a kid. To come back to the ratatouille, since this is the topic, this is a dish that I could talk about for hours. In fact, this is one of the first two dishes that got me into cooking, the other one being ‘patates au lard,’ i.e. potatoes cooked with bacon, but this is again another story. My mother gave me the basics. Then I developed and improved my personal method, replicated or created some (23) variations of ratatouilles, without forgetting its cousins, the tian and the piperade. As I mentioned it, I could talk about it for hours. I could also write a 50-page booklet praising its merits and exploring its immense possibilities… And since it happened that we had beautiful home- or locally-grown summer vegetables of different species, shapes and colors, ratatouille has become like a game. A challenge. An addiction? Is it serious, doctor?

A ratatouille war: Cooking separately or cooking together? 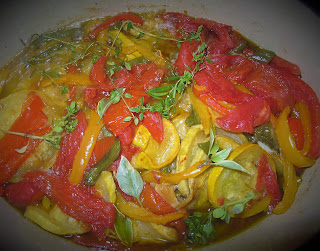 Talking about method, there is a big debate about ratatouille… Somehow similar to the one between those in favor of pitting the cherries in clafoutis and those who leave them as is. I belong to the latter camp, but that’s another subject.

Should each vegetable (eggplant, zucchini/squash, bell peppers, tomatoes) be cooked separately or together? As far as I am concerned, depending on my mood, the time available, and the "competition" (I mean other posible dish(es) on the stove, as cooking the ratatouille separately requires using 2 dishes, generally a frying pot and a stew pot), I cook them either together OR separately... but in fact, I should rather ay I cook them together/separate or separate/together. Well, I guess this deserves some explanation:


Together or separate, I have in fact a few personal tips and I respect some rules combining the advantages of both methods: the seven rules of ratatouille…

The (my) seven rules of ratatouille 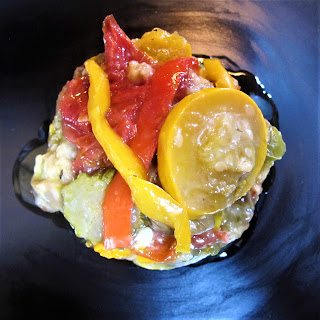 1/ I use, approximatively, the same gross volume of each basic vegetable (eggplant, zucchini/yelow squash/patty pan, bell pepper, tomato). I mean volume, and not weight, and "gross", i.e. non-cut/diced/sliced. Thus, a bell pepper is equivalent to a big tomato, a medium size eggplant, and to 1 small zucchini + 1 small yellow squash, for instance...

2/ I respect a specific order in adding the vegetable layers. First come the onions and the bouquet garni (bay leaf, thyme, rosemary, basil, sage, marjoram, savory… - attached together with a chive stem for instance, it’s easier to fish at the end!), then the eggplant topped by the garlic (crushed cloves), followed by the zucchini family, then the bell peppers, and at last the tomatoes.

3/ I allow some time between each layer. Something like 5/10 minutes between each of the eggplant, the zucchini and the bell pepper, and the tomatoes around 30 minutes after the bell pepper. It gives me the time to prepare and cut the vegetables as they come, and to rub each of them (except the tomatoes that have a special treatment, see below) in olive oil, herbs and salt (fleur de sel).This allows each vegetable to cook as appropriate. The eggplant for instance needs more cooking. It also acts as a blotting paper. Putting it first gives it the time to absorb olive oil instead of other vegetables’ water.

4/ The tomatoes have the particularity to render a lot of water. One option is to cook them separately and to tease out the pulp. I also peel them (after plunging them into hot water then in iced water), remove the seeded parts and let the pulp rest with salt in a strainer to eliminate the water.

5/ I hardly stir the ratatouille, at any stage (otherwise, it will become all mushy), and if so, I do it very, very gently, or I just shake the pot. But I regularly baste the top of the dish with the juice in the bottom (with a table spoon, a ladle or a baster).

6/ I cook it in two phases, i.e. simmering for around 120 minutes (i.e. 60 more minutes after adding the tomatoes) with the lid on. Then, I let the pot rest in the corner of the stove for a couple of hours (or overnight in the fridge). Finally, I warm it up for around 1 hour, playing with the lid, off or on, and adjusting the temperature (low to medium) to evaporate the liquid. And again, gently stirring and basting.

7/ Last tip, I strain (once again gently) the ratatouille before serving it, so that it doesn’t bathe in its (delicious) juice. I use the juice for pasta, risotto, salad dressing (with balsamic for instance).

On top of its fabulous and sunny odors, I love ratatouille for its versatility. It is basically a side that could be served with multiple types of meat and fish, but it could also be a main dish by itself and leftovers could be recycled in many different ways. And it can be varied in a quasi infinitive way, revisited, deconstructed, reconstructed... It might even be sweet. But this will be another, or rather many other stories, other Ratatouillages...
entree vegetables