or where a math teacher's tip is useful in the kitchen 50 years later... 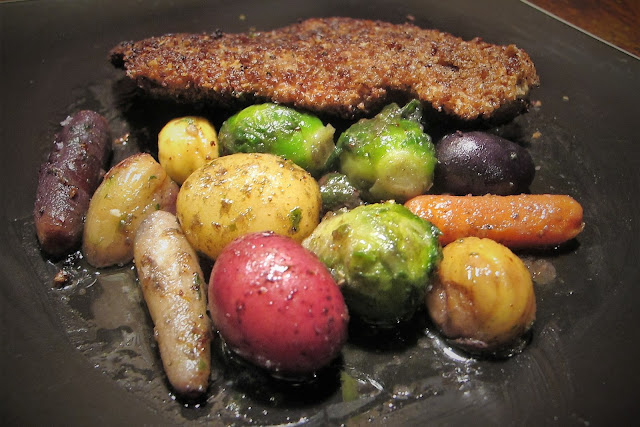 I had to improvise tonight as some unexpected guests showed up. This is never a problem. I got this from my mother... and in fact, I would lie if I claim that I dislike this type of challenge... The only thing is that I had to arrange with a Sunday evening fridge... Lucky enough, the freezer, a fabulous invention, was here to give a help... So, the deal was: some frozen chicken breast "scalopini", a stack of Brussels sprouts, some new potatoes, multi-color carrots and chestnuts, and chestnut bread leftovers...
Okay, I will go for a fall "jardinière", i.e. mixing all those vegetables together, including the chestnuts, and cooking them, after blanching the sprouts, with butter, and some more butter, and just enough water to cover them, and some more butter as you never know (in fact a method inspired by the great Alain Passard).
But what about the chicken? To grill it, to cook it with the vegetables, to shred it... Blah! Blah, blah, blah! Nothing was really exciting because, mainly, there was no connection between the chicken and the vegetables... I really didn't find something that could make sense... When I dig in a problem without finding the solution, I applied the method that my math teacher from 6th to 10th grade taught me. It's funny, because I was very good in math, but I totally forgot everything about integrals, vectors, complex numbers, probabilities... But I still remember his advice and I still apply it frequently, 50 years later, in many aspects of my life, not only cooking... "Billey, si vous séchez, allez pisser un coup", which can be translated, a bit softened as French speaking foodies will immediately get it "Billey, if you don't know, go to the bathroom"... Which I did!
The result: a chicken scalopino alla Milanese, i.e. breaded scalopino, first rubbed with chestnut flour instead of normal flour, then soaked in beaten eggs, and finally coated with a flavorful breading made of processed toasted chestnuts and chestnut bread leftovers...
Delicious.

Thank you to my math teacher for his cooking tip!