Bouillabaisse!!! Its name is by itself the recipe 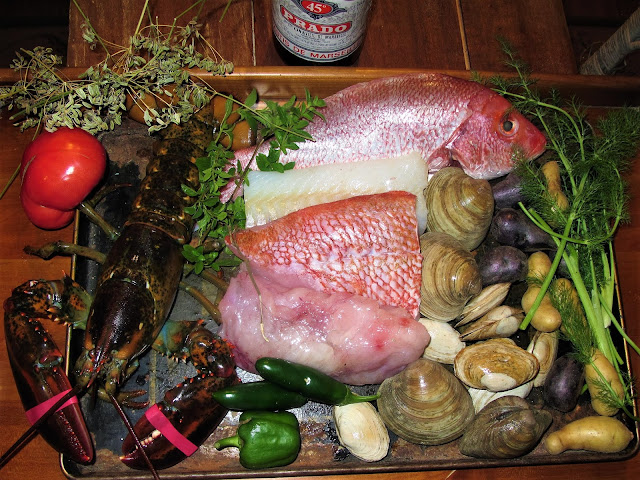 As a matter of fact, “bouillabaisse” is the contraction of “BOUILLE ABAISSE”, short for “when it boils, lower the burner (i.e. simmer it)”. Well, this is the theory, or rather the history, at the origin of the bouillabaisse, and also what the purists still consider as the one and only bouillabaisse, with some other requirements regarding the types of fish (see below). As a matter of fact, the bouillabaisse was originally a dish invented by the fishermen of Marseilles and around, in order to cook and to conserve the non-sellable fish (because too cheap, full of bones or damaged during the fishing process).
Thus, they used to put in a big pot of water all those fishes (whole, and sometimes not even gutted) with vegetables and herbs, bring it to boiling, and then, when boiling, you have guessed, simmer it, for several hours. 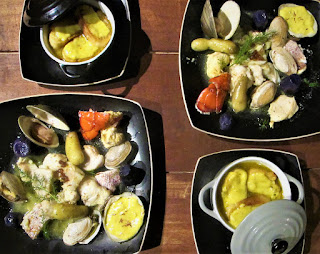 This is theoretically the authentic bouillabaisse, i.e. more a fish soup than a fish dish, since all the fishes were disaggregated in what should have been a fabulous broth, but just a broth.
From then, the restaurants and chefs adopted the recipe and transformed it in a more gourmet dish, using the “bony” fishes (local species of scorpion fish and weever) and the head and bones of the other ones to make a broth (with fennel, herbs, spices...), and add the vegetables (potatoes mainly) and the noble fishes (John Dory, local species of porgies, etc.) just for the required time of cooking.
The “authentic” bouillabaisse requires to use a minimum of 6 or 7 different fishes, and only local species, those mentioned above, plus some others like the red gurnard, most of those fishes being rockfish (which doesn’t refer to the fish found here, but to a category of fishes living in the rocks), which makes quasi-impossible to make an authentic bouillabaisse outside of the area of Marseilles. Some “extras” like shellfish, langouste (spiny lobster) or lobster, may be added as well for a more "gastronomic" experience. I still remember, with a great emotion 25 years later, a fabulous langouste bouillabaisse shared with friends in an Antibes restaurant named Chez Paul le Pêcheur.
That said, each French region by the sea has its own “bouillabaisse”, called cotriade in Brittany, bourride in Languedoc, fish waterzooi in the North, or even freshwater fish pôchouse or matelote in Burgundy and in the Paris area. 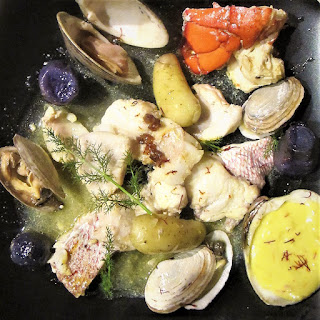 This is my “Ohioan” version of the Marseillaise bouillabaisse that I tried to authenticate by using pastis and playing on the words (i.e. using a red rockfish… from Heinen’s!), on top of a lobster, a whole red snapper, a monkfish tail, a cod filet, and big neck clams and steamers… I made a broth with the lobster head, the snapper head and bones, a generous dose of dry white wine and a shot of pastis, plus herbs (marjoram and fennel feathers from the garden, thyme… and saffron). I added the potatoes, the lobster tail and claws (kept for another day) and cooked them in the broth for their respective minimum required time of cooking and no more. I cooked separately the clams and steamers (they were a bit sandy).
I served the broth with garlic-rubbed croutons topped with an aïioli* (to make it simple, a mayonnaise in which I incorporated a mashed potato, a garlic clove and saffron, served here in an empty clam shell with the bouillabaisse).
Just the broth was like le petit jésus en culotte de velours to use a favorite expression, freely translated by “to die for”, and of course the bouillabaisse was a great moment.

I definitively love to and the “boil and simmer”